THE RIGHTS OF GOD IN THE LITURGY

An interview has been run on Zenit recently with Fr. Nicola Bux, a consultor for the Office for the Liturgical Celebrations of the Supreme Pontiff, on the topic of the liturgical reform of Benedict XVI. The full interview includes discussions surrounding the place of Latin, liturgical abuse, the matter of ad orientem, and many other subjects and points of liturgical interest.

Here are just a few excerpts.

Between Innovation and Tradition

ZENIT: How is Benedict XVI reforming and why has he sparked so many reactions?

Father Bux: The reform of the liturgy, a term to be understood, according to the liturgical constitution of the Second Vatican Council, as instauratio, namely, as a re-establishment of the correct place in ecclesial life, did not begin with Benedict XVI but with the very history of the Church... The instauratio is continuous, because the risk that the Church will slide from her place, which is to be source of Christian life, always exists; decadence comes when divine worship is subjected to the personal sentimentalism and activism of clerics and laity who, penetrating in it, transform it into human work and spectacular entertainment... Does not a liturgy that has become entertainment need reform? This is what Benedict XVI is doing: the emblem of his reforming work will be the re-establishment of the cross in the center of the altar, to make it understood that the liturgy is addressed to the Lord and not to man, even if he is a sacred minister.

ZENIT: What meaning does tradition have in Christian history and faith?

Father Bux: Tradition is one of the sources of Revelation: the liturgy, as the Catechism of the Catholic Church says (1124), is its constitutive element. In the book "Jesus of Nazareth," Benedict XVI reminds that revelation has become liturgy. 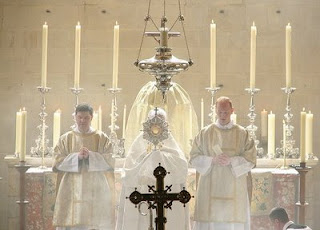 ZENIT: You have many times affirmed that in a correct liturgy it is necessary to respect the rights of God. Can you explain what you are trying to uphold?

Father Bux: ... The sacred liturgy exhibits this attribute because it is not made in our image -- in this case the worship would be idolatrous, that is, created by our hands -- but is made by the Omnipotent Lord. In the Old Testament, with his presence he indicated to Moses how he had to predispose in its most minimal details the worship of the one God, next to his brother Aaron. In the New Testament, Jesus did as much on defending true worship by expelling the merchants from the Temple and giving the Apostles the dispositions for the Paschal Supper. The apostolic tradition has received and re-launched Jesus Christ's mandate. Hence, the liturgy is sacred, as the West says -- it is divine, as the East says, because it is instituted by God.

A profound reflection is necessary on all this... The recovery of the Ius divinum in the liturgy, contributes much to respect it as something sacred, as the norms prescribed; but also the new ones must be followed again with a spirit of devotion and obedience on the part of the sacred ministers for the edification of all the faithful and to help many who seek God to find him living and true in the divine worship of the Church. The bishops, priests and seminarians must learn again and carry out the sacred rites with this spirit, and contribute to the true reform desired by Vatican II and above all to revive the faith that, as the Holy Father wrote in the Letter to Bishops of March 10, 2009, runs the risk of being extinguished in many parts of the world.
Posted by The Sibyl at 20:36