Catholic's are familiar with purple or violet (+ Rose) as the colours for vestments, tabernacle veils and frontals for the lenten and passiontide seasons (see www./saintbedestudio.blogspot.com for a more exhaustive treatment of liturgical colours).

In England, at least before the reformation the colours of Ash (often unbleached linen) frequently ornamented with red and lenten Gray/blue where commonly in use.
Certainly it was the pratice of the Sarum Use and indeed many of the other English Uses of the Roman Rite.

The English reformation whilst not being as extreme in it's initial phases as on the continent, ultimately saw the destruction of the "Catholic Mass" and all of it's associated decorations and trappings.  The Oxford movement within the Church of England in the 19th century (essentially a catholic movement) included members who wished to restore "Catholic" elements to their liturgy.  Whilst some where content to immitate Roman Catholic pratice as it existed at the time others where keen to restore the glories of the pre-reformation patrimony and tended toward the rite of Sarum or Salisbury sometimes as a means to assert their "Englishness" as opposed to the "Romans" particularly at a time when "Anti-Roman Catholic" sentiment was still very strong.

The Romantic period in which the Oxford Movement flourished coincided with the Gothic Revival Movement in art and architecture.  It was this happy union of movements which saw the restoration, rebuilding and re-ornamentation of all most every church in the British Empire.  The Roman Catholic Church in England was also heavily influenced by these events and benefited from the revival - Indeed through these events acquired arguabley the greatest of the Gothic Revivalists - Augustus Welby Northmore Pugin.

Below are two photos of the Lenten Array of Westminster Abbey the other is the small Catholic Church of St Birinus (designed by William Wardell) in Oxforshire recently restored. 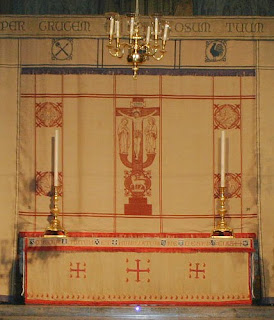 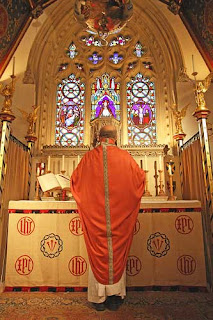 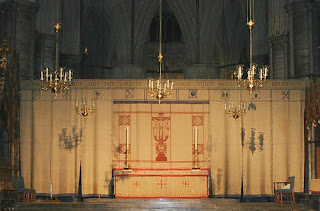