Wollongong Valle to the Sisters - It's all over or is it? 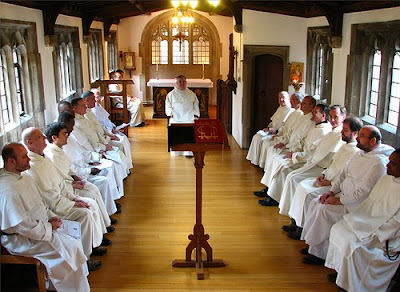 It seems that we must bid farewell to more religous women in the Diocese. Two more convents (religious houses) have closed. It is a sad day when Religious leave any diocese - but it should be noted that there are many new (and often unheard of)religous communities which would be happy to fill the breach. Tragically as ever, there are those who would rather do without religious than to employ or even allow to enter the diocese these "New Religous" because of there obvious tendancy towards the traditional.

What is becoming increasingly event in recent months is that there are many liberals who would rather run the ship aground that take on any traditional groups, this is certainly so in France as we have seen in previous posts. This state of affairs is downright scandelous.
For those dioceses who do read the "sign of the times" there will be a painless transition and quiet possibly a reflowering but for those who do not - prefering to remain ideologues to the end there judgement will be harsh in the future, particularly of Ordinaries who continue to rest all there efforts in the already failed experiments of the adjournamento period.
Pray that those in authority have the humility to recognise that the "Experiment" has failed and that we must turn away from those failed ventures and invest in a future of the greater certitude which our centuries old tradition has always offered us. Do not allow the appellations, and dismissive comments which have so long been made about those who adhere to this tradition become true of our dioceses; "Out of step", "behind the times", "not relevant", "unable to handle change", "not open" "narrow", "troggladite" etc. etc. 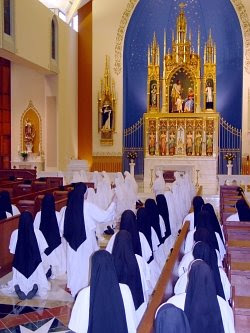 Already the dawn is breaking, and there are those who are opposing the new translation, could they be described as conservatives unable to change? Perhaps this might engender some empathy for those who found it difficult to cope with an altogether new mass? I fear not.
Does the fact that many of the closures of religious houses are of those whose orders have given up on trying to find new vocations and have resigned themselves to presiding of the latter days of their respective institutes; Why have they run out of steam? Why do they not wish to perpetuate themselves? Could it be that it is simply easier to let things go? Or could it be that the many changes to their religious lives (i.e. habits, common life, public prayer etc) fails to attract vocations? Are we too prideful to return to a model that actually works?
The truth is that people are always attracted to the perrennial, what is transient - may have momentary attraction but will eventually fail.