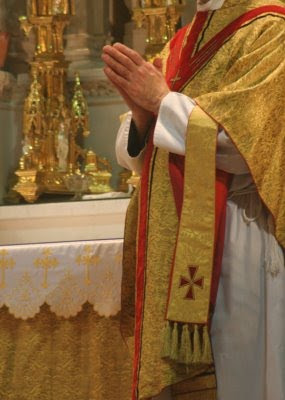 Zenit reports on the maniple - Fr. Mauro Gagliardi of the Office of Liturgical Celebrations of the Supreme Pontiff, say it was never abolished and offers catechesis on the symbolism of this lovably recondite bit of vesture:
"The maniple is an article of liturgical dress used in the celebration of the extraordinary form of the Holy Mass of the Roman Rite. It fell into disuse in the years of the post-conciliar reform, even though it was never abrogated.

The maniple is similar to the stole but is not as long: It is fixed in the middle with a clasp or strings similar to those of the chasuble. During the celebration of the Holy Mass in the extraordinary form, the celebrant, the deacon and the subdeacon wear the maniple on their left forearm. This article of liturgical garb perhaps derives from a handkerchief, or mappula, that the Romans wore knotted on their left arm. As the mappula was used to wipe away tears or sweat, medieval ecclesiastical writers regarded the maniple as a symbol of the toils of the priesthood.
This understanding found its way into the prayer recited when the maniple is put on: Merear, Domine, portare manipulum fletus et doloris; ut cum exsultatione recipiam mercedem laboris (May I deserve, O Lord, to bear the maniple of weeping and sorrow in order that I may joyfully reap the reward of my labors).As we see, in the first part the prayer references the weeping and sorrow that accompany the priestly ministry, but in the second part the fruit of the work is noted. It would not be out of place to recall the passage of a Psalm that may have inspired the latter symbolism of the maniple.
The Vulgate renders Psalm 125:5-6 thus: Qui seminant in lacrimis in exultatione metent; euntes ibant et flebant portantes semina sua, venientes autem venient in exultatione portantes manipulos suos (They that sow in tears shall reap in joy. Going they went and wept, casting their seeds, but coming they shall come with joyfulness, carrying their maniples)."
Posted by The Sibyl at 15:12