Facing the Lord in the New Rite (Novus Ordo) 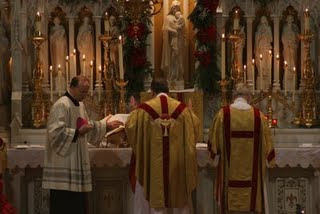 Here is a post from WDTPRS (What does the prayer really say?)

The priest genuflects, takes the Host and, holding it raised a little way over the paten or over the chalice, having turned toward the people, says in a clear voice: Behold the Lamb of God….

Then in #133 we find: Et sacerdos, versus ad altare, secreto dicit: Corpus Christi….

And the priest, having turned toward the altar, says silently: May the Body of Christ…

In these two rubrics there is a specific order of actions. First, the priest turns to the people. Then, he turns to the altar. This is only possible if the priest is celebrating Holy Mass facing the altar and the people are behind him facing the same direction as the priest. The rubric is clear in this moment before Communion.

Somewhat less immediately clear is the rubric at the Orate Fratres in #29, which says that the priest, while standing at the middle of the altar, turns to the people (versus ad populum) to say “Pray brethren, that my sacrifice and yours…”. Then in #30 the priest is directed to speak the Super Oblata prayer, but there is no indication that he turns back to the altar: there is no second versus. Why? The priest, turning to the people to invite their response, simply continues to turn in the same direction back to the altar.

The single versus in this case indicates a completed turn in circle. In #132 and #133 (above) the two different instances of versus indicate two turns, one toward the people by the priest’s right and one toward the altar by his left. There is no complete circle. In this way the Novus Ordo is consistent with the older “Tridentine” Rite at this same moment in Mass. In the older, traditional way the priest turns by his right away from the altar and toward the people. He speaks the invitation. He turns back to the altar, always by his right, in the same direction, thus completing the circle. The rubric in the 2002 Missale Romanum (MR) has language very similar to the corresponding rubric in the 1962MR.
Posted by The Sibyl at 15:58