Listening recently to the comments of Fr Kennedy of South Brisbane on the ABC, I was struck at how utterly dated his "model of church" was. Typically he was cast as a liberal martyr in an oppressively, out of step, medieval Church (another very tired media cliché). The relative success of his ministry is held up as the justification of his "model of church". I suspect that it has more to do whith his personal charm and charismatic personality a phenomenon describe by Msgr Ronald Knox in his memorable tome "Enthusiam", a situation as unsustainble as it is transient.
This pursuit of their "model of church" often sees them become the most intolerant people in the Church! It is a"model" that has been tried and has failed and should have been well and truly buried in the late 80's. Indeed it is this intolerence and arrogance which has been in large measure to blame for the marginalisation of traditional catholics and often the cause of their adheasion to the Society of St Pius the X and others. Its doors are open to everyone except those who hold a deep attachment to Catholic tradition. For such as these there has only been derision. 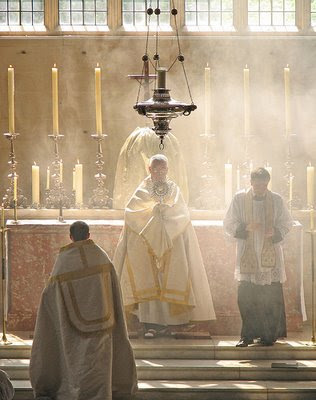 What were once their catch cries now seems to have tragic application here "your not moving in the same direction as the church" and "your being divisive". There is no room here either for respect of catholic tradition or indeed for the divine institution of the Church and the authority which Christ himself gave to it.
Sadly the state of Queensland and the dioceses within it are still swimming in the same direction as they did in the 80's and early 90's even though the tide has definitely changed. Other eastern coastal dioceses in NSW also adhere to these outdated models. Continuing to swim against this tide in a church where the pendulum has definitly swung back to the centre will definitely have the following effects;

Dioceses will continue to decline that continue to follow a selective interpretation of Vatican II and subsequent church documents and decrees which exclude:

Unprecedented numbers of young men are entering our seminaries but only for those dioceses that really and genuinley support and encourage the reforms which the Successor of Peter has enacted and encouraged. Ultimately dioceses wi

ll be forced in the correct direction simply in order to survive.

So much is dependent on priestly vocations - clearly the vocations are there - so why aren't you getting them? Try the traditional experiment it never fails!