Patronal Feast of Gwynneville - Missa Cantata - Sunday 1st of February 3.00pm, according to the "More Ancient Use" 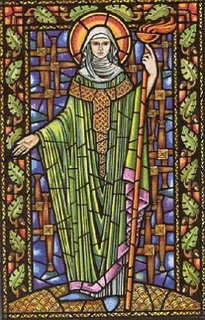 Bridget (Brigid, Bride, Bridey) of Kildare was born around 450 into a Druid family, being the daughter of Dubhthach, court poet to King Loeghaire. At an early age, she decided to become a Christian, and she eventually took vows as a nun. Together with a group of other women, she established a nunnery at Kildare.

She was later joined by a community of monks led by Conlaed. Kildare had formerly been a pagan shrine where a sacred fire was kept perpetually burning.Rather than stamping out this pagan flame, Bridget and her nuns kept it burning as a Christian symbol. (This was in keeping with the general process whereby Druidism in Ireland gave way to Christianity with very little opposition, the Druids for the most part saying that their own beliefs were a partial and tentative insight into the nature of God, and that they recognized in Christianity what they had been looking for.)
As an abbess, Bridget participated in several Irish councils, and her influence on the policies of the Church in Ireland was considerable.Many stories of her younger days deal with her generosity.
TWO VERSIONS OF ST BRIGID'S PRAYER
"I would like the angels of Heaven to be among us.
I would like an abundance of peace.
I would like full vessels of charity.
I would like rich treasures of mercy.
I would like cheerfulness to preside over all.
I would like Jesus to be present.
I would like the three Marys of illustrious renown to be with us.
I would like the friends of Heaven to be gathered around us from all parts."
&
I wish I had a great lake of ale for the King of kings, and the family of heaven to drink it through time eternal.
I wish I had the meats of belief and genuine piety, the flails of penance, and the men of heaven in my house.
I would like keeves of peace to be at their disposal, vessels of charity for distribution, caves of mercy for their company, and cheerfulness to be in their drinking.
I would want Jesus also to be in their midst, together with the three Marys of illustrious renown, and the pople of heaven from all parts.
I would like to be a tenant to the Lord, so if I should suffer distress, He would confer on me a blessing. Amen
Posted by The Sibyl at 21:36