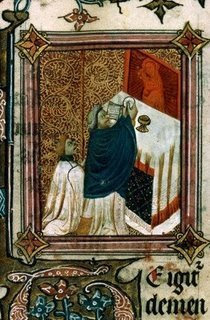 Every 1st, 3rd and 5th Sunday of the month sees the usus antiquior or tridentine mass celebrated at the Church of St Brigid, Gwynneville.

For those not familiar with this liturgy it is the traditional latin mass which had been the norm in catholic churches until the new rite (novus ordo) replaced it in 1970. It is celebrated entirely in latin and the priest leads the people in prayer facing "liturgical east".

The Mass has been celebrated there for the last 2 years, by Fr John Stork, sanctioned by Bishop Peter Ingham of Wollongong. This was largely in response to the Motu Proprio - Summorum Pontificum of Pope Benedict XVI - who placed the ancient rite on equal footing with the newer form.

Clearly however the Popes message has not been well understood in the diocese, since the current provision of a mass every second Sunday means that those who wish to attend the older rite exclusively must leave the diocese every other week.

Wollongonensis understands that the Bishop of Wollongong doesn't really understand why the Pope has allowed the celebration of the older rite - he was quoted as having said to another Bishop during WYD 08 that it would have been better to let it (the old rite) die out, despite his seemingly supportive message in a letter to the clergy of the diocese late last year.

Clearly more confusion is to follow since the Summorum Pontificum seems to point at the much muted liturgical reform of the new rite, not to mention the compulsory training of all seminarians in the older form. Perhaps that motu proprio deserves re-reading?
Posted by The Sibyl at 21:04