Ordination to the Priesthood - In the "RITUS ANTIQUIOR" 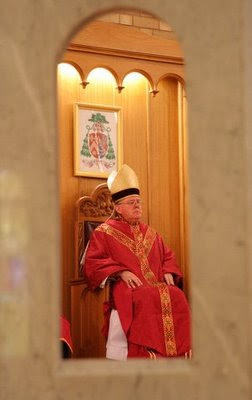 Meanwhile in a neibouring diocese - which might as well be a gallaxy far far away, The Archbishop of Canberra-Goulbourn ordained two local lads from Canberra, according to the Extraordinary form of the Roman Rite, to a capacity crowd.
Both Dominic Popplewell and Marko Rehak, members of the Priestly Fraternity of St Peter, received the order of priesthood in a magnificent ceremony in the Canberra Cathedral.
The recent renovations by Archbishop Colridge made the task of adapting the Church for the Ritus Antiquior that much easier.
As a celebrant he showed a rarely seen comand of the Latin language, not to mention the required chants.
The sermon was succint and to the point lasting not more than 7-10 minutes (had he been reading Archbishop Ranjiths exortation to clergy not to bore people with interminable homilies?). 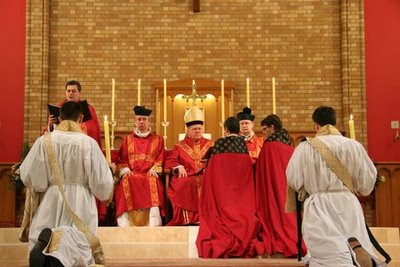 The Music was abley conduted by Mr Gregory Tondys, Precentor and Director of Music at the Maternal Heart chapel at Lewisham - they sang the Missa Cunctipotens and chanted the proper for St Cecilia. The Motets were by the French romantic composer Cezar Franck, Ubi Caritas, and Ave Verum Corpus.
Frs Popplewell and Rehak then gave their first blessings in the grounds before the cathedral, before retireing to the reception which was held at the Diggers Club not far away. 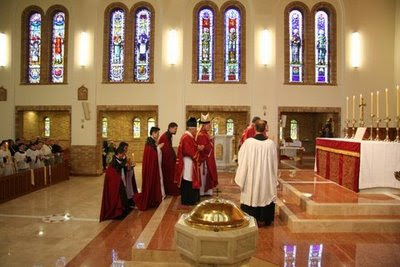