WHY CAN'T WOMEN BE PRIESTS?

By Br. Tom Forde OFM Cap from his blog - Breathing with both lungs 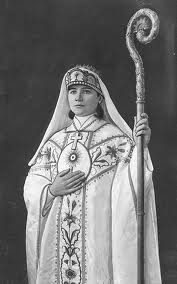 Let us take the last one first. To be human is to be gendered. We never meet just a human being but a man or a woman, boy or girl. That we are male or female shapes our relationship to ourelves, our community, the cosmos and God. For a believer this differentiation of the human race into two complementary genders is no accident. It is a dimension of the Divine plan and a reflection of the Divine Mind. You can see this in ancient myths and pagan spiritualities: Earth Mother and Sky Father, and Ying, Yang etc.
I would propose to you that the fact that Christ was a man was no accident nor was it incidental to His mission. The Son was sent to reveal the Father and only a son can reveal his father. In choosing masculinity Christ the Word was fulfilling His plan, making a statement about the Father, revealing something of the heart of God. He it is who establishes His Kingdom on earth and incorporates us into His Body, the Church. In case you didn't know ancient kingdoms weren't democracies. He has chosen us, called us, saved us. We depend upon Him, for everything.
Those in Holy Orders (Deacons, Priests and Bishops) are further called to be incorporated into Christ as head of the Body, a role that not only involves offering and celebrating the Sacraments but governing the Church. In a sense it is like a 'second baptism' for it confers a 'character' on the one ordained that sets him in a new relationship vis-a-vis the Body. As only the Son could reveal the Father so only a son can become an icon of the Son and stand in His place. Gender is not incidental but part of our fundamental make-up. It is so for us and was so for Christ, so it must be a condition for ordination. 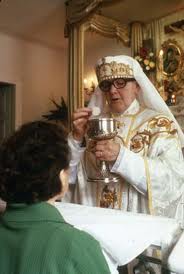 Nowhere does the Church deny ordination to women on the basis of lack of intelligence or moral weakness. On the contrary the Church has repeated praised and supported women for both their contribution to the Church and Society and for the example of their lives and the depths of their spirituality.
We must also reject attempts to us the idea of equality. Equality is a legal fiction, useful but a fiction nontheless. It is easily put to the test and found wanting. Besides since membership of the Church is by invitation who can demand 'rights' to anything not given by Christ? In addition we must object to interpreting through the lens of 'power'. What actual power do clergy have? Besides our Lord teaches us that service is how He sees the Church's mission.

If not on the thin grounds of 'equality' and 'power-sharing' what basis is there for arguing for women's ordination? Scripture only opens the door to men. Tradition is clearly against it and the Magisterium has consistently ruled it out. The Church cannot and will not ordain women.

That in a nutshell is that argument against the ordination of women.

Further I went and had a look at the arguments given at the womenpriests site. I was not surprised.

Argument one confuses the priesthood of the faithful in which all the baptised share and the sacramental, ordained priesthood which is open only to men, because only they can bear the image of Christ as Son offering Himself to the Father.

Argument two, that women must have been present at the Last Supper, fails to take into account that Jesus looked for a room and according to Luke He sent Peter and John (His closest men) to find it by following a 'man carrying a jar of water'. Water fetching was women's work and that's why such a sight would stand out. A man fetching water implies a male-only house (perhaps Essene?). There is no mention of women present in any of the accounts of the Last Supper most notably Luke and John that are so sensitive to women especially His mother.

Argument three depends on cultural bias. That bias existed is not denied but that does not necessarily mean the decision is wrong. A racist judge may condemn a black man found guilty of murder and still be just in his condemnation. This argument also means an implicit denial of the influence and guidance of the Holy Spirit.

Argument four raises the issue of women deacons. If only the early Church had used a consistent and clear terminology from the begining but even now we talk of 'permanent deacons' as if diaconal ordination were not of itself permanent. That aside research shows that although women were called deacons this service did not include service at the altar but in assisting with the formation and baptism of women and children not unlike the work done by generations of nuns since.

Argument five is another example of confusing the priesthood of the faithful and that of the ordained. Mary's vocation is unique but remains firmly within that of the laity.

Argument six confuses ecclessial communions with Churches. There is actually only one Church from which some parts are in schism but yet retain all that is necessary to be the local manifestation of the true Church. these have the threefold order of Bishop, Priest and Deacon, valid Sacraments and maintain Tradition. Other communities have, while believing in Christ, abandoned these elements and are not local 'Churches', they have no valid Priesthood. It is these bodies that have 'ordained' women.

Argument seven relies on personal experience. Women feel called so the Spirit must be calling them. Christ has given His Spirit to all who receive baptism but the discernment of spirits He has reserved to the Bishops. Rome has discerned and identified this 'spirit' speaking in the women's ordination movement as not being from God. Draw your own conclusion.

At heart these arguments attack the very nature of the Church, denying the Spirit's action on and in the Church, denying Tradition, denying even reason itself. In over twenty-five years of listening to arguments for the ordination of women I have seen no deepening, no movement. The same old arguments are proferred while the orthodox side makes progress in its undestanding. At heart we have to rediscover the mutually enriching but distinct roles of lay and clergy, the differences between the priesthood of the laity and that of the ordained. We have to rediscover our living Tradition for the Church is her Tradition.