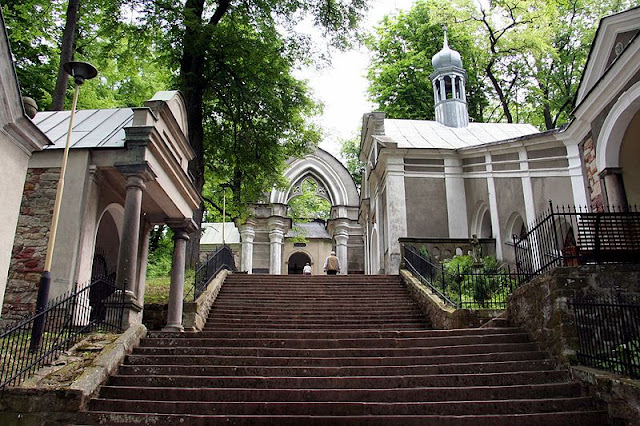 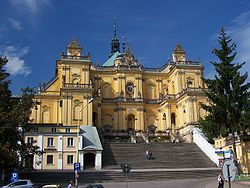 The wooden statue of Our Lady, dating from the thirteenth century, was originally placed in a mighty linden tree located at this site. According to the legend a blind man regained his eyesight after praying before the statue. After that miracle a stone altar was erected in front of the tree. The first wooden chapel was built in 1263. A larger church was built in 1512 but was destroyed during the Thirty Years' War. The present pilgrimage church 'Visitation of Our Lady' goes back to a church built in 1695–1710 following a design thought to resemble the Temple in Jerusalem. However, all but the mighty Renaissance façade had to be torn down already three years later because the structure had become unsafe. The fourth and present church in Baroque style was then built 1715–1723, and financed by the local nobleman and owner Count Franz Anton von Götzen. In 1936 the church received the status of a 'Basilica minor' from Pope Pius XI. Pope John Paul II awarded the Madonna of Wambierzyce the title of "Queen of Families" in 1980.
﻿
﻿
Posted by The Sibyl at 16:51