What is going on at the Vatican?  The much hailed Papal Master of Ceremonies, Mgr Guido Marini seems to have made some changes that can range from the sublime to the ridiculous!

Certainly, he has made the so called "Paul VI Surplices" optional, with a distinct return to lace - which is obviously the Monsignor's preference since he is never seen in anything else - we have not seen the re-emergence of the "Classical Roman Surplice" as depicted in well thumbed editions of the (Usus Antiquior) Roman Pontifical (Pontificale Romanum).  We continue to await it's coming...

But the chasubles, the chasubles!  What has happened?  Are we seeing off the rack commercial Italian vestments?  De Ritis et alia?  Now that would be disgraceful considering the attention which has always been given to Papal vestments, their quality and (not always pleasing) design.

Recent reports indicate that the good Mons has also favoured the recent new appointment of musical director, an appointment vehemently opposed by the eminent Mgr Miserachs Grau formerly of the Pontifical Academy of Sacred Music - could we be in for more Italian schmalz.

﻿﻿﻿﻿﻿ THE GOOD...
﻿﻿﻿
"This beautiful cope is made from dupion silk.  Its imaginative ornament in black and gold silk damask has all been applied by hand, as has the braid placed around as an edging.  This cope is part of a larger set of matching dalmatics, chasuble and mitre which was made for Pope John Paul.  Upon becoming Master of Ceremonies in 2007, Monsignor Guido Marini, set aside this set and a red set like it.  They have not been seen since." 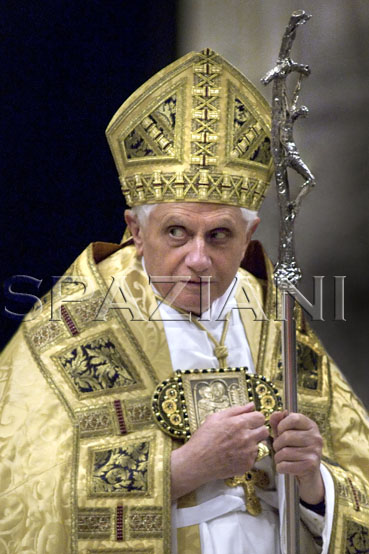 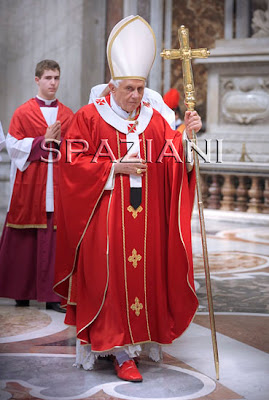 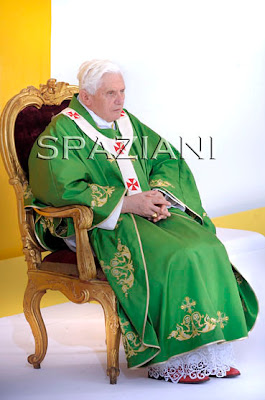 Perhaps he was trying to match the shoes??? I can really think of NO other reason why ...Pope Benedict proves himself particularly humble in consenting to wear it!(The red set) There really is no excuse I can construct for the rest of the BAD lot.

Maybe Mons Marini feels that in order to put the Pope in good stuff he needs to put him in bad to silence his critics?