TIME TO GET THAT REPORT READY MY LORD

The Bishops are due to submit their reports to Rome on the implementation and any problems encountered in response to the Holy Fathers accompanying letter to Summorum Pontificum.

1.  Do the laity have a veiw about the implementation of Summorum Ponticificum in the Diocese of Wollongong?  Yes - very strong views.

2.  Have the laity been consultated at any stage about the implementation of Summorum Pontificum? No - not at any stage.

3.  Has their been any change to the number of Extraordinary Form Masses celebrated in the Diocese since before the Motu Proprio?  No - despite requests there has not been any increase - most people leave the diocese on Sundays.

4.  Have there been any attempts to identify the needs of those attached to the Extraordinary Form of the Mass in the diocese?  No. - not at any point.

5.  If a report to the Ecclesia Dei Commission regarding the implementation of Summorum Pontificum is sent misrepresenting the facts mightn't there be a backlash in the diocese from those who until now have exercised patience and good will toward the bishop and his advisors. I suspect that if people think that they have been ignored, overlooked or marginalised there is a threshold of patience and this issue may represent that threshold. 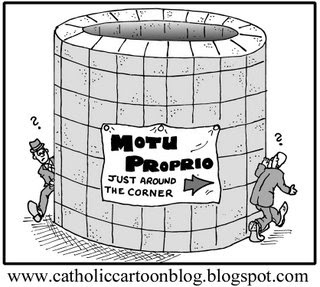