Here is reprinted a charming article by James Chegwidden written in 1998 a luminary of the Thomistic Studies Centre
CORPUS CHRISTI AND ST THOMAS
The feast of Corpus Christi is cause for major celebration in the Church on the Thursday following Trinity Sunday. For Thomists it should be highly regarded, for the author of the Mass and Office of Corpus Christi was St Thomas Aquinas himself.


Corpus Christi is a late feast, being only introduced in the 13th century, by which time most of the other feasts in the classical Roman Missal had been established for almost a millennium. In 1264, Pope Urban IV issued a papal bull, Transiturus, promulgating Corpus Christi as a feast for the Universal Church. He was acting after years of petitions from several sources, most notably from St Juliana de Cornillon, who had received visions from the Saviour requesting such a feast. Urban cast his eyes around the known world for candidates to compose a Mass and Office for the Feast. His search ended with Thomas Aquinas, the friar whose fame was fast spreading through out Europe.

What a glorious choice! The commission came from the Pope, but the call was from Christ – "Write, Sing of This, for This is My Body that was delivered for you, and My Blood that was shed for you". And sitting in his quiet cell, Thomas began to write, and to sing. His song would soon resound on every hill and echo in every valley of Christendom.

The Mass and Office he wrote can still be seen and heard in the classical rite of the Roman Church. It is work of genius, which the famous Abbot Cabrol described as "one of the most beautiful canticles in the Catholic liturgy", and Pius Parsch as "unquestionably a classic piece of liturgical work". The poet Santolius avowed that he would have given his whole life’s work to become the author of just one verse of the Hymn for Lauds, Verbum Supernum. Testimony to the greatness of work comes also from other great saints, such as St Bonaventure. Having also been commissioned by the Holy See to write an office for Corpus Christi, upon reading just one page of Thomas’ efforts, he immediately took his work – almost certainly a great masterpiece as well – and burned it in front of St Thomas. When the shocked St Thomas asked "But why?" he replied, "Because I would not have it on my conscience, Thomas, that I had attempted to stand between the world and this."

Thomas had begun with words that have been compared to the clash of cymbals – "Pange Lingua":


Sing, my tongue, the Saviours glory,
of his flesh the mystery sing:
of the blood all price exceeding
shed by our immortal King,
destined for the world’s redemption
from a noble womb to spring.


For St Thomas the mystery of Christ's Body and Blood is the mystery of the Incarnate God, the Word made Flesh, and his work does not merely cover the main themes of the doctrine of the Blessed Sacrament. The Mass text is richly theological in content, as is the Office, combining in exquisite poetry the precise teaching of the Church on the Real Presence, the nature of Christ's sacrificial offering in the Mass, and Holy Communion. The Lauda Sion, the sequence of the Mass, reveals much of this fine teaching:


What He did at supper seated,
Christ ordained to be repeated,
In his memory divine;
Wherefore we, with adoration,
Thus the Host of our salvation
Consecrate from bread and wine.


Taught by Christ the Church maintaineth,
That the bread its substance changeth,
Into Flesh, the wine to Blood.
Doth it pass thy comprehending?
Faith, the law of sight transcending,
Leaps to things not understood.


Here, beneath these signs are hidden
Priceless things, to sense forbidden;
Signs, not things are all we see –
Flesh from Bread, and Blood from wine,
Yet is Christ in either sign,
All entire confess’d to be.


They, too, who of Him partake,
sever not, nor rend nor break,
But entire their Lord receive.
Whether one or thousands eat,
All receive the self-same meat,
Nor the less for others leave.


Lo the wicked with the good
Eat of this celestial food:
Yet with ends how opposite!
Life to these, ‘tis death to those:
See how from life taking flows
Diff’rence truly infinite!


Nor do thou doubts entertain,
When the Host is broke in twain;
But be sure, each part contains
What was in the whole before.


'Tis the simple sign alone.
Which hath changed its sign and form,
While the signified is one
And the same for evermore


What joy for Thomists to read the doctrine expressed by Christ rendered into pristine exactitude by St Thomas, and sung in the liturgy annually! Take the antiphon for Vespers:


Oh blessed banquet,
Wherein Christ is received.
His Passion is again with
us, the soul o'erflows
with grace: a pledge
of future glory is given to us.


St Thomas was a master in choosing psalms and other biblical texts for the feast, particularly for his skill in isolating many texts of the Old Testament prefiguring the Eucharist. His Office is far more biblical than most of the compositions of the time. We see Christ, the priest forever according to the order of Melchisedech offering bread and wine (Ps 109); we see Christ, the divine Moses, on the desert journey of life, giving food to them that fear Him (110). We remember the Church’s hymn of thanks in Psalm 115: What shall I render unto the Lord for all He has granted me? I will take the chalice of salvation. Psalm 127 shows the Church as a mother, a fruitful vine, Christ the Father of His family, winning His Bread by great toil. Ps 147 shows Jerusalem at peace, where her Lord nourishes her guests with the fat of wheat. The Magnificat recalls of course that He fills the hungry with good things, and sends the haughty rich empty away.


The second nocturn of Matins contains St Thomas’s own writings, the very ones for which Christ spoke to him from a crucifix and said Thou hast written well of me, Thomas. They are sermons written by the saint, from which I take here a brief extract:


O banquet most precious! … Can anything be more excellent than this repast, in which not the flesh of goats and heifers, as of old, but Christ the true God is given us for nourishment? What more wondrous than this Holy Sacrament! In it bread and wine are changed substantially, and under the appearance of a little bread and wine is had Christ Jesus, God and perfect man. In this sacrament sins are purged away, virtues are increased, the soul is saturated with an abundance of spiritual gifts. No other sacrament is so beneficial. Since it was instituted unto the salvation of all, it is offered by the Church for the living and the dead, that all may share in its treasures.


When St Thomas first heard his brethren singing the Office he had composed and arranged, he started to cry, weeping tears of love and gratitude to the Eucharistic Lord who had inspired such a thing of splendour. Did God, I wonder, give Thomas a glimpse, perhaps, of the mighty future his Feast was to have? Did He show him the panorama of millions of processions, winding through street, town, hill, valley, countryside and cloister, involving billions of Christian faithful in the one great cry – Pange lingua gloriosi Corporis Mysterium! Did he see the flowers strewn on the streets of Spain for the enthroned Body of Christ to see or the hushed English recusants adoring the Real Presence in a small cellar or the vast square of St Peter’s Rome with hundreds of thousands of the faithful being blessed with the Host in the monstrance by the Vicar of Christ himself, after singing that canticle – Pange Lingua? Whether he knew it or not, St Thomas had written the hymn by which Christ’s bride the Church would forevermore praise her divine Spouse.


May we always sing with St Thomas the closing words of the Lauda Sion:

Thou take pity on our need!
Thou Thy flock in safety feed,
Thou protect us, Thou us lead,
To the Lord of Heavenly Life.
Amen. 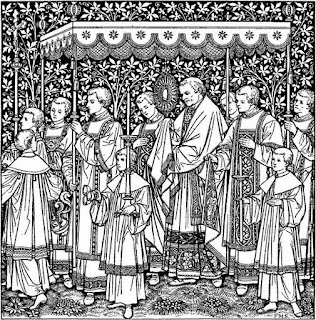 The potrait is not a likeness
This rather lovely depiction of a euchatistic procession at a glance looks like the work of Pustet, the (accesively floriated backgroud gives it away) but perhaps more interesting are the various forms of apparel and the great number of deacons and subdeacons - who seem to be destingished by the degree of ornamentation between their clavi.  Dom Roulin would not approve of the canopy though - too rigid a construction.
Posted by The Sibyl at 19:36