Why is Gothic Revival the preeminet style for Australia? 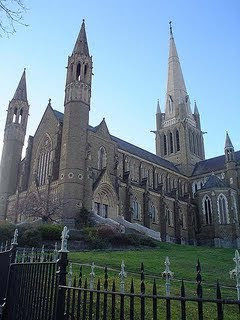 The Romanesque style, in my humble opinion, is a most glorious, and above all liturgical style, it's direct decendant the Gothic style however, partakes of many of the same attributes and principles as well as being a truly christian style.
Regardless of my opinions however, and for significant historical reasons associated with the establishment of the Catholic Church in Australia it is the New Gothic style that was to be the hallmark and jewel of the naiscent Australian Church.
The Benedictine pioneer's embraced the vision of a new golden age for the church in which the newly resurgent gothic style was to be preeminent.
Archbishop Rodger Bede Polding, not only attended the opening of St Chad's Birminigham but undoubtedly met with it architect A.W.N. Pugin - It was this architect and his school of architecture that took the Colony by storm. Indeed to such an extent that it was difficult until more recent time to find any other style.
The English Benedictines did not achieve their ultimate vision, but they did set in place many foundations upon which we can and should build - after it is as a result of their efforts that the Gothic style is the closest style to any that we can truly lay claim too.
Allmost all out cathedrals are built in this style most notably St Mary's Cathedral Sydney, and St Patrick's Melbourne, Adelaide, Brisbane, Perth and Horbart to naem but a few, all have Gothic Cathedrals. 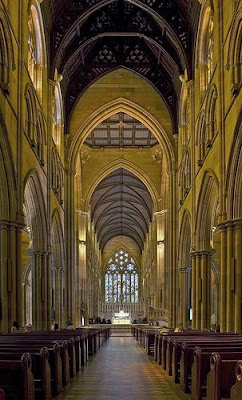 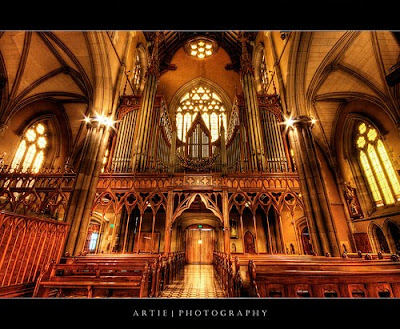 To be continued
Posted by The Sibyl at 21:44