Sacred Music an appeal to the Pope 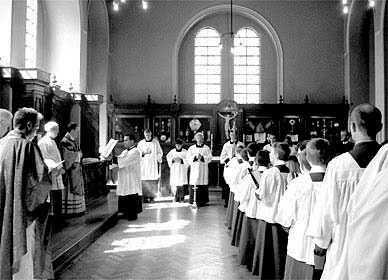 The following is a sample chapter:VI. SACRED MUSIC AND LITURGICAL CHANT

Holy Father, the Church has today the opportunity to regain his "highly" role in the magisterium of music, mainly in the field of sacred music and liturgical chant, which must necessarily respond to the categories of "good" and "right" for their intimate connection, not just correspondence, with the liturgy itself (Paul VI, Address to the singers of the papal chapel, March 12th, 1964).

In the ancient history of Christianity the dialectical relationship between sacred music and secular music has produced many times the intervention of the Church to "clean up the building of the Roman liturgy" (a term explicitly used by many popes) from the secularist intrusions that the music itself lead in the temple and that, over the centuries and the gradual technical and musical development, have become increasingly severe and spill-over from the proper liturgical use, ending often in the assumption of roles of self-referencing or profane nature.

From the time of the Const. Ap. “Docta Sanctorum” issued by Pope John XXII (1324), the magisterium has always indicated the righteous ways of understanding music in the service of worship, gradually adopting new techniques compatible with the liturgy, but always and consistently pointing up to the present day (including the magisterium of Vatican II and the entire post Vatican II period) in the Gregorian chant, the primal root, the source of constant inspiration, the highest – because it’s simply the most noble – form of music that can perfectly embody the Catholic liturgical ideal also by virtue of its anonymity and its meta-historical true aesthetical, verbal and sensitive universality.

We cannot now definitely establish musical forms and styles a priori, but therecovery of Gregorian chant, good polyphonic and organ music (even inspired by the Gregorian), – ancient, modern and contemporary – would certainly, after decades of absolute shock and “probability” in music, recall the liturgical "words" that the Catholic tradition in art and music has given us for centuries: they have worked – using a representative expression of Pope Paul VI in the Enc. "Mysterium Fidei" – as real "tiles of the Catholic Faith", which was always founded on sensible data, endowed with truth and beauty; and always devoid of sterile and mannered or archaeological intellectualism, to be avoided with care (as indicated by Pope Pius XII in Enc. “Mediator Dei” that introduced the liturgical reform of the late twentieth century.

Maybe in the arts devoted to the service of worship, music is the strongest, for that constant "catechetical" meaning which the magisterium has constantly recognized, and also the more delicate because, by its nature and unlike the other arts, requires a tertium medium between the author and the viewer, or the interpreter. For this reason the Catholic Church should take better care of the music than of other arts and should, as happened in the past, urge the education of both authors and interpreters: for sure today the effort is much more difficult than in Middle Age, Baroque period or in the XIX century, since the actual society is completely secularized. However today is needed a clear knowledge of the fundamentals so that the musicians – once endowed with the needed expertise – can recover the "sensus ecclesiæ" together with the "sensus fidei".
Posted by The Sibyl at 16:20