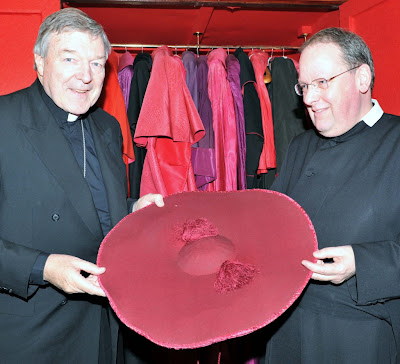 His Eminence Cardinal George Pell, Archbishop of Sydney is rumoured to be heading off to Rome to take up an import post, possibly in the Congregation for Bishops.

Darling of orthodox catholics in Australia, he is nevertheless viewed by many traditional Catholics as a pragmatist and a politician. Often seen overseas sporting the Cappa Magna and celebrating the Extraordinary Form of the Mass, His Eminence was unable to accomodate the traditional catholic youth at World Youth Day with the same favour.

Some have argued that his overseas expliots, in this regard are staged to gain favour with the Roman authorities. Well, it must have worked!

The obvious question now is who will replace him?
Posted by The Sibyl at 17:20