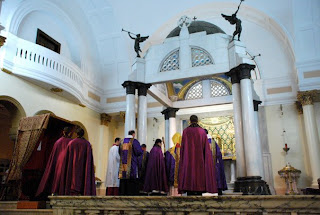 Well, Happy Reader, what a Grand Occasion I found myself at on Saturday!  A Pontifical High Mass celebrated by an American Cardinal resident in Rome, but visiting Australia.  It seemed like all the worst combinations, but who would have expected such beauty in downtown Sydney?  I was excessively diverted.
In processed His Eminence Cardinal Burke swathed in red and attended by his inferior ministers.  Gasps were heard and I feel sure I recall seeing a group of matronly-looking woman swoon as the cappa magna swept past them.  I saw a couple of dilettanti complaining about a cappa magna being used at all on a ferial day in Lent, but no one took any notice of them.  It was too good.

The Mass was sung by a choir of local Catholics and a rather fine job they did of it - chant and polyphony in a happy and harmonious blend.  I did miss not hearing much of the organ, but of course it was Lent and we Catholics like to observe these distinctions.  We must have our marks of Penance.

The ceremonies in the sanctuary all seemed to go quite well: there were any number of copes on the altar, I got quite dizzied by their swirls.  The Cardinal wore the most tremendous mitres.  Most of the vestments seemed to match each other.  I cornered a priest afterwards and asked him where the vestments came from.  He told me in hushed tones that they were the gift of an undisclosed Patroness of the High Arts.

I understand that they were especially made for this Mass by an anonymous women from the Diocese of Perth famed for her work in making sets for the theatre.  A bystander, who seemed to know in close detail everything that was going on said, "no", they were vestments of the Saint Bede Studio.

[Editor's note: We can confirm that these vestments were NOT made by the Saint Bede Studio, but certainly represent a courageous attempt at replicating them].

The Cardinal gave a very effective homily which, happily, didn't last too long, because no one could see him save those seated at the altar.  He sat at a rather nice chair, but hanging somewhat insecurely over him was a drape, intending to create a canopy.  Looking at this edifice afterwards, I couldn't help but think that it in part resembled a Hansom Cab, partly a bed in the High Victorian style and lastly the wimple and veil of Saint Faustina.


I could not quite describe the style of the Church to English readers: something between Spanish Mission style and inter-war Portugese.  It was a peculiar variety of Ethnic Art Deco.  Still, a beautiful church and quite full for the occasion with enthusiasts of all ages.

The above article was submitted to us by an English authoress, who happened to be present for the Pontifical Mass, but who preferred to remain anonymous.
Posted by The Sibyl at 06:57

The church was packed full with people standing. There were many young people in attendance.

Why are all the contributors Anonymous?

And who am I? That is something I'll never tell.

Well, this blog entry has made my day - some of your best work I must say! I am truly disappointed I was unable to attend. I do trust the spectacle did not divert attention from the point of the exercise however, that is, Holy Mass.

By the way did the lady in Perth create the mitres you mention or were they obtained elsewhere? I would be interested to see some photos.

Why is everyone so interested in the vestments? Photographs shown on other websites make it very clear how badly made they are. It seems obvious that is why the woman who made them wished to remain anonymous.

what are the bad features of how the vestments are made?

Ah Gossip Girl, you give yourself away!

Thank you for posting this very colourful account of a remarkable event!

I think your authoress is only partly correct about the vestment-maker. It was a man from Perth who made them, I was told, who seems to enjoy turning his hands to just about everything.

The hansom cab is a kind of horse cart designed and patented in 1834 by Joseph Hansom, an architect from York. The vehicle was developed and tested by Hansom in Hinckley, Leicestershire, England. Originally called the Hansom safety cab, it was designed to combine speed with safety, with a low centre of gravity for safe cornering. Definition courtest of Wikipedia

I believe that during the celebration of Mass, Cardinal Burke was insistent that his identity be kept anonymous as well.