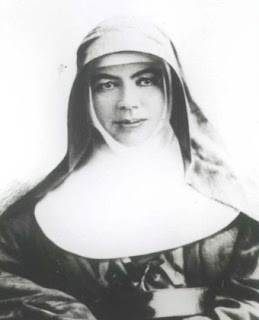 Whilst I have enormous sympathy for the life and work of St Mary of the Cross, I have little or none for the current incarnation of her spiritual daughters the "Brown Joeys".  Sr Carmel Piltcher one of the liturgical luminaries subjected us to an excrusiating performance (liturgy) including, a pagan (aboriginal) rite of cleansing (evoking, God knows, what demons from the nether world) - then liturgical dance (of the seven veils) at the beatification and something along the same lines on the night before the canonisation in Rome - Not one drop of which is in any authentic sense liturgy but theatre.  It was perhaps scenes like this in recent years that lead one parishioner to comment after Mass the other day that he would be attending the Wollongong St Mary of the Cross Mass at Win Stadium for the spectacle or show which he said "afterall the Catholic Church does best".  No doubt.

Undoubtley, theatre is what will be happing at Win Stadium at strategic intervals during a Mass.  The populus will know doubt be moved by the popular tributes to St Mary and leave the event with a warm glow not dissimilar to that which one experiences after an excellent performance at the theatre or opera.  This "feeling" is as ephemeral as it deep - leaving no profound or lasting impression.  "Mary our ozzie saint walked our soil, knows our land and our ways" - so what!

The real St Mary of the Cross may well be kept hidden from the vast bulk of Australians - her writtings upon any close inspection are more like the views of Traditionalist Roman Catholics than sisters of the congregation she founded - perhaps we will see a Josephite reform group - I hope so.  I wait to hear news of the Win Stadium Makillop Extravaganza (or Josephites on Parade) - perhaps everyone will get a little blue scarf to take home with them to be united with the sisters in their new habit!
Posted by The Sibyl at 18:36

A tad scathing Sybil! The Josephite nuns deserve our respect considering the history of their untiring work for the poor and marginalised in this country.

Nevertheless, I do believe the Australian contemporary church has missed the point of Mary's spirituality. Her unfailing obedience to authority and respect for the church heirachy despite the obvious faults present, demonstrated her humility and fidelity - which undoubtedly constitute the depth of her sanctity.

Is it? Perhaps the Josephite Sisters who I have known that have confided in me some of the retched treatment they had to endure because the refused to remover their veils - what happened to the "untiring work for the poor and marginalised" - Charity, I am told begins at home.

Let she who is free of sin cast the first stone.

These poor lost women need people to pray for them. I agree Sr Pilcher's stuff is choreography, not liturgy.