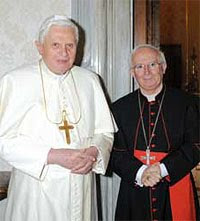 Below is a translation taken from "The New Theological Movement" blogspot, of the recent interview given by Cardinal Antonio Cañizares to Paolo Rodari of Palazzo Apostolico (Il Foglio).